Everett Hull, a pianist and bassist, and Stanley Michaels, an electrical engineer and amp technician, established Michaels-Hull Electronic Labs in Newark, New Jersey in 1946.[1] Their first products were a pickup designed by Hull for upright bass, and instrument amplifiers that had minimal output distortion, which jazz musicians favored. The pickup was called the "Amplified Peg," which became "Ampeg." Michaels left the company in 1948,[1] leaving it to Hull, who relocated to 42nd Street in Manhattan the following year and renamed it "The Ampeg Bassamp Company."

In 1956, Ampeg's name was simplified to "The Ampeg Company" which became "The Ampeg Company, Inc." when the company incorporated in 1959. In 1962, Ampeg relocated to Linden, New Jersey, and became a publicly owned company after an initial public stock offering the following year.

In September, 1967 Ampeg became a subsidiary of Unimusic, Inc. when the newly formed investor group acquired a majority share of Ampeg stock. Unimusic consisted of investors interested in capitalizing on opportunities in the highly fragmented music equipment manufacturing market of the time, not unlike CBS which owned Fender and Rhodes, or the later Norlin which at times owned various music instrument brands, including Gibson Guitars, Lowrey and Moog Music. Everett Hull was wrongly under the impression that the new owners would act more as a partnership; instead, his role within the company was reduced. He tendered his resignation in October, 1968.[1]

In 1971, Ampeg was acquired by Magnavox,[2] which also owned Selmer, the Band Instrument manufacturer, but was better known for televisions, radios and Hi-Fi systems.

In 1980, Ampeg was acquired by Music Technology, Inc.[1] (MTI). MTI declared bankruptcy a few years later, and St. Louis Music (SLM) acquired the assets of Ampeg in 1986. SLM was subsequently bought by LOUD Technologies in 2005.[2] 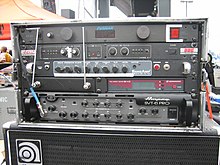 The current Ampeg company is mainly known in the field of bass amps.[3] They also have a line of guitar amplifiers and a remake of the Dan Armstrong guitar and bass.[4]

In May 2018, the Ampeg brand was acquired from LOUD Technologies by Yamaha Guitar Group, Inc.[5][6]